Samba Camara holds a PhD in Interdisciplinary Arts with a concentration in Black literatures and popular cultures.Courses he has taught include Global Black Popular Cultures (AAAD288), African Film and Performance (AAAD 202), Introduction to African Literature (AAAD 201), Introduction to Africa (AAAD 101), Contemporary Cultures of Islamic Africa (AAAD 303), and all levels of Wolof language.

Dr. Camara’s current book manuscript is tentatively titled, Beyond the Praise Song: Islam, Popular Music, and the Poetics of Cosmopolitan Nationhood in Contemporary Senegal. Pulling from extensive fieldwork and analysis of song and performance, the book examines the social and cultural meanings behind the apparently conflictual encounter of the sacred and the profane in Senegalese popular music. It analyzes music-mediated cultural encounters as an integral part of a postcolonial modernity, one that carries important local metaphors of interethnic and interfaith solidarity and national integration in Senegal.

Dr. Camara is the Co-PI of a research project collecting and digitizing West African Islamic manuscripts in the Pulaar-speaking Senegal River valley and southwestern Mali. In collaboration with UNC Professor Mohamed Mwamzandi, hehas been awarded a digitization grant from the British Library’s Endangered Archives Programme (link).

As a former Fulbright scholar, Dr. Camara is very much interested in international educational initiatives and curriculum globalization. His teaching takes these matters seriously and he has invested much in setting up Teach/Study Abroad programs aimed to increase students’ skills acquisition through implementation of non-traditional modes of learning. 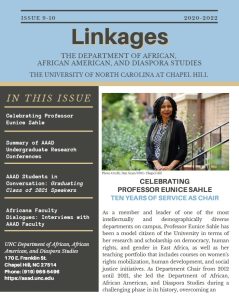